What is hypnosis for labor?

According to the well-known pregnancy and childbirth cite, Baby Center, “Hypnosis is a state of deep mental and physical relaxation that enables the hypnotized person to focus intensely on a thought or feeling, blocking outside distractions. In this state, proponents say, the mind is more open to suggestions that change our beliefs and behavior. When a woman prepares for childbirth with hypnosis, these suggestions aim to replace fear and expectations of pain with confident expectations of a safe, gentle – even comfortable – birth. Getting hypnotized doesn’t involve a sinister man swinging his pocket watch in front of your eyes, telling you you’re getting sleepy. In the most popular hypnosis for childbirth programs, women learn to hypnotize themselves, using techniques such as deep breathing, visualization, and affirmations or hypnosis scripts. For example, a woman using this technique may concentrate on the sound of her deep breathing, taking her further into a hypnotic state, and visualize her baby easing downward with each breath.”

A good example of self-hypnosis is when you day dream, zone out, or perform a monotonous task and later have no memory of doing it. In self-hypnosis you can never be made to do something against your own will. You are fully aware of everything you are doing and can choose to return to your normal state whenever you would like.

How does hypnosis for labor work?

“Hypnosis advocates give several explanations of how the process works. One theory holds that when a woman feels fear during childbirth, her body releases stress hormones that trigger the body’s “fight or flight” response. This causes muscles to tighten and interferes with the birthing process. By training the subconscious mind to expect a safe, gentle birth, they say, women can avoid going into the fight-or-flight state, allowing for a smoother birth” says Baby Center.

“The subconscious mind is responsible for many of our bodily functions, and it’s also the house of our belief systems,” says Rachel Yellin, a HypnoBirthing instructor in San Francisco, California. “In this state of relaxation we fill the mother’s mind with positive images and associations of birth, so she can call on these while she’s giving birth. It’s combining the positive powers of the mind with the natural animal body.”

They go on to show the research of William Camann, director of obstetric anesthesia at Brigham and Women’s Hospital in Boston, Massachusetts, and author of Easy Labor: Every Woman’s Guide to Choosing Less Pain and More Joy During Childbirth.

“For example, relaxation can lower maternal levels of circulating catecholamines [stress hormones], and lower levels of catecholamines can facilitate uterine contractions. The converse is also true – heightened stress and fear can elevate catecholamines, which can slow or stop labor,” says Camann.

“Camann says there’s also validity to the practice of using a gentler vocabulary to describe birth. He points to a 2010 study he published, which found that when doctors used intimidating language to describe the injection of local anesthetic before placing an epidural – for instance, “This will feel like a big bee sting; it will be the most painful part of the experience” – women rated the injection as more painful than when doctors used gentler language, describing the sensation as a small pinch. “The words we use are very powerful,” he says” continues Baby Center.

Hormones are an exceptionally important part of the HypnoBirthing program. Not only do you learn how to stop the production of the catecholamines mentioned above, nut you also learn that by deeply relaxing you can make your body release endorphins, or feel good hormones, which are 200 times more powerful than morphine.

How effective is hypnosis for labor?

The HypnoBirthing program reports that, “surveys show that 23 percent of women who used the technique for a vaginal birth got an epidural, compared with a national average of 61 percent in 2008, and that 17 percent delivered via C-section, compared with the national rate of 32 percent.”

Camann says he does see benefits even if your goal is not necessarily to have a natural birth. “I’ve seen many patients who’ve used epidurals and hypnosis. This is just a generalization, but it usually goes better than with the average woman having an epidural,” he says. “In my experience, the patients are quieter and more relaxed, even if it got to the point where they’re asking for an epidural. It’s a nice environment ­– I like being present for these births.”

Although many moms who study self-hypnosis for childbirth hope to avoid medications, interventions, and C-section delivery, self-hypnosis can help women in any type of delivery. 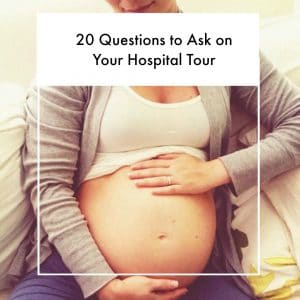 20 Questions to Ask on Your Hospital Tour When you go on a maternity hospital tour take lots of...