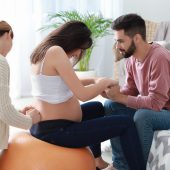 I was in Tara’s class in the fall of 2016. I was about 4 months pregnant with my first child and planned to have a home birth. Anyway, I wanted to thank Tara for the knowledge she shared with my husband and me and to describe to you my birthing experience just to highlight how much this course helped me.

After Tara’s class, I listened to the hypnobirthing as well as hypnobabies CD’s consistently in the evenings. Close to my due date one evening, I felt something similar to a dull pain in my back that came in waves. My mom pressed on my lower back when the waves started to get a little more intense. At this point, I still thought that perhaps my body was just practicing for actual labor.

In any case, I found it helpful to pop in hypnobirthing and hypnobabies tracks just to practice relaxing. The surges continued to be very mild and I felt so calm that I had no problem telling my husband to go ahead and leave to play volleyball with his friends.

That night, I fell asleep to my hypnobirthing and hypnobabies tracks. I woke up once, recognizing that my surges felt a little stronger, but then quickly fell back asleep. It wasn’t until my water broke that I awoke fully. My husband called my midwife immediately. She reminded us that the labor would start to intensify, but she urged me to try to sleep through it, because she said the next day would be a long one. She asked Eric if my contractions were becoming painful. I hadn’t experienced any contractions as painful so much as uncomfortable so we told her no. She then assured me that she would be at my house in the morning once labor had progressed.
An hour or so after that I started to vomit, which I remembered learning from Tara could be a sign of transition. It was just so soon after the surges had begun to intensify that it didn’t make sense to me that it could be a sign of anything. Other than the vomiting initially, I felt fine. Nonetheless, we called my midwife again and let her know what was happening. Again she asked if my contractions were painful. Again, I was able to tell her that they were not so she said to go back to sleep.

About 20 minutes later, I definitely could not sleep through the surges. I went to the bathroom with my computer so I could continue to play my hypno tracks. I moved around and sang through my surges. After some time, I decided to get in the shower. Our plan was to have a water birth, but at this point, our midwife had said to wait on setting up the pool, since it would be a while before we needed it. I got on my knees in our bathtub and continued to sing through my surges. Sometimes, I felt like there was a longer break in between them so I experimented with standing up and then kneeling back down to relax my body. It seemed to work and every time I did that my surges would get closer together. I felt really good! I was excited but in a strangely calm way. At some point, I felt like my body was taking the reigns and I had no control of the frequency of my surges. They just all felt very close. Nonetheless, the hypno tracks helped me practice joy and gratitude. In fact, I felt very capable of having a conversation between the surges, but there was no one in the bathroom to talk to. My husband was busy calling people and calming my mother down.

At some point, I noticed that my body seemed to be pushing with more urgency and I couldn’t sing through surges quite the same way that I had up until that point. Again, I remembered the class and how Tara had described this natural pushing our bodies would begin to do. I realized that I was probably bearing down, which was a little shocking because it all seemed to be happening so fast. Now I really needed the pool! At this point, I asked my husband to set it up.

What I thought I said was, “Eric, can you please get the pool ready so that I can continue labor there? I’m concerned I might have this baby in our ceramic bathtub.” What came out of my mouth, according to my husband, was, “Tub. Tub. Tub. Tub.”

At some point, my sense of urgency despite my inability to articulate myself spurred my husband into motion and he quickly pumped up the pool and filled the tub with a few inches of water. Without delay, I put my feet in only to discover that the water was COLD! Apparently, at that very moment, our shower ran out of hot water. It was the one moment where I no longer felt so calm. I became very conscious of the fact that I had a choice. I could choose to put myself back in a calm state or I could lose it. I decided to focus my energy on my sense of gratitude that we were having a baby. After telling my husband that the water was cold, he began racing downstairs to heat water in the kitchen and racing back up to put the hot water in the pool. He barely had time to let my midwife know that the baby was definitely not going to be waiting several more hours to be born.

After a few minutes of pushing, my friend who was supposed to be my doula arrived. She made her way to the doorway. I greeted her and then continued letting my body do its thing. I could feel my baby’s head and my skin stretching around him. I remembered what you said about the ring of fire so when I started to feel the burn, it actually made me very joyful. It meant my baby was going to arrive very soon. I also remembered that you had said to put some counter pressure on the perineal tissue to slow things down a little bit and prevent tearing, but really, I didn’t have much choice in the speed of his arrival. My body gave one last push and suddenly I went from feeling a head to seeing a little white body moving under the surface of the water.

I thought, “IS SOMEONE GOING TO PICK THIS BABY UP OUT OF THE WATER???”

But my midwife wasn’t there, my doula was in shock and my husband was in the doorway with another kettle of hot water. No one had prepared me for THAT possibility. I went ahead and lifted my little baby out of the water myself and that was that. My three hour labor ended and a whole new relationship with my little son began.
Oh, and my midwife did show up 20 minutes later.

Anyway, I just wanted to share this to show how indispensable your help was. Since then, I have had a second baby and I was equally reliant on remembering everything from your course to make that a calm birth as well.

I wish you continued success and hope that you continue to impact other women’s lives as much as you have mine.